‘Made in Dagenham’, a film by Nigel Cole and Stephen Woolley, captures a key moment in British trade union history. It’s about the landmark strike in 1968 by women machinists at Ford’s factory. They wanted regrading as semi-skilled workers – it came to be a strike for equal pay for women workers. 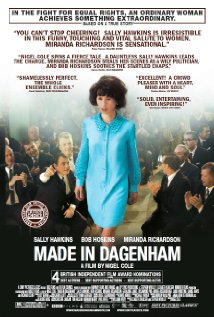 ‘I remember it vividly’ , says the feminist and writer Beatrix Campbell, then a sub-editor at the communist daily, the Morning Star. ‘This was 1968. Everybody was fascinated by the strikes all over Europe, sit-ins, the most glorious theatres of resistance. And here was something in the British context that was somewhat surprising. These were working class women who were having a go. It felt extraordinary, spectacular, gorgeous. It also felt odd – in the sense that much of the riotous assembly and glorious revolutionary activism of 1968 invited support. That wasn’t true of this strike. It was somewhat shut.’

Listen to Bea talking about ‘Made in Dagenham’:

Beatrix Campbell talking about ‘Made in Dagenham’