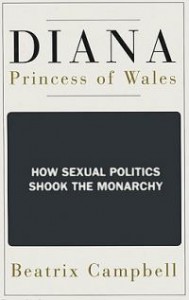 In this powerful, incisive book, acclaimed political writer and thinker, Beatrix Campbell, explores the life and death of Diana, Princess of Wales, providing the first feminist analysis of the role Diana played.

Diana’s only qualifications for her arranged marriage were her body, her face, her fertility, and her virginity, and the world assumed public ownership of her as it followed and assessed her every move; never before had a young woman been subject to such scrutiny.

Life under surveillance from the palace and the press was a paradox – Diana gained a simultaneously powerless and extraordinarily powerful position. Campbell demonstrates how Diana used her royal status and high public profile to promote radical causes with which she identified, including campaigns on such issues as AIDS, eating disorders, battered and dying women and children, and finally landmines. But most important – and unprecedented in this century – she exposed the coldness and cruelty of the Royal Family. She invited the media into her life; talked about the pain she had endured and called the future King to account .In doing so, Campbell argues, she detonated the ‘magic’ and ‘myths’ of the royal family. It was sexual politics, above all, that ignited a new wave of Republican feeling.

Campbell also explores how Diana aroused the enmity of the establishment, including a media that was largely hostile on the grounds that Diana should not have the right to publicity when she wanted publicity, and privacy when she wanted privacy. Diana died, Campbell argues, hounded by a posse of men who refused her the right to say yes when she meant yes and no when she meant no. But Diana was mourned by millions of women; women who identified with Diana’s life and who, consciously or subconsciously, understood the messages of her death.