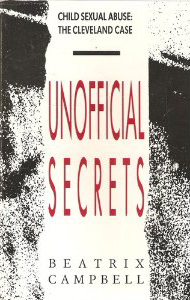 When in July 1987 the diagnosis of child sexual abuse in some forty families in Cleveland hit the national headlines, society was confronted not only with the spectre of a much wider crisis, but also with a challenge to our stereotypes of both victims and perpetrators. For the children at the centre of the controversy were not the teenagers of popular mythology: they were as young as four years, even four months, from every class, boys as well as girls.

When Cleveland Council made child sexual abuse a priority, it led to the appointment of specialist consultants and paediatricians trained in radical new approaches to diagnosis.

It was they who uncovered what few others in Britain had seen, or wanted to see, throwing professional services and private lives into turmoil.

In this study of the circumstances and implications of the Cleveland case, Beatrix Campbell examines the ways in which the different professions – police, doctors, social workers, health visitors, bureaucrats, educators – interpret the problem according to their particular stake in it. She looks too at the issues raised for every one of us by the evidence of the Cleveland findings: that our assumptions about the nature and frequency of child sex abuse must change before solutions can be found.