The Finucane family get the de Silva Report, December 2012 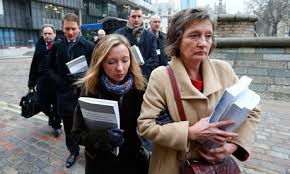 WHEN is a ‘conspiracy’ only ‘collusion’? And when is collusion only normal life? Sir Desmond de Silva doesn’t answer these vital questions in his review published in December 2012 of the 1989 murder of the human rights lawyer Pat Finucane in Belfast. http://www.patfinucanereview.org/

But he does something rather potent: he publishes hitherto secret material, and in doing so he undermines his own interpretation of the evidence, that there was ‘no overarching state conspiracy.’

Almost despite himself, his report invites the conclusion that ‘conspiracy’ is a diversion.

There needn’t have been a plot: killing nationalists and threatening lawyers was normal life in Northern Ireland.

He was asked to review whether the state was involved. The answer is simple: yes, it was. If there was no conspiracy, his report confirms the evidence of overarching state collusion to kill targeted British citizens in Northern Ireland. What else can we make of evidence that the security forces poured ‘Thousands of items of intelligence material’, some of it in ‘unusual detail’ to the loyalist UDA?

De Silva discloses an alarming statistic: ‘85 per cent of this [intelligence] was drawn from security force records’. Intelligence cascaded into the UDA for a targeted programme of assassinations while it was bringing down the 1985 Anglo-Irish peace deal. This was not counter-terrorism, this was an ‘overarching’ state strategy to sponsor – a word de Silva rejects – auxiliary, unaccountable, sectarian paramilitaries who terrorised nationalists and tried to defeat the peace process.

De Silva confirms that a torrent of intelligence, photographs, maps and profiles, were delivered by the Army and the Royal Ulster Constabulary direct to the UDA, and that Finucane was one of many lawyers who received the ‘black spot’ and repeated death threats.

The security services were also arresting loyalists, insists de Silva, as if this was evidence that the state was even-handed. But these arrests can be interpreted in another way: the security services were not culling the loyalist paramilitaries, they were controlling them; they were not disabling, they were directing them — by giving something more deadly than guns or bombs: information.

Those running the RUC, the Army, the Northern Ireland Office and the Joint Intelligence Committee regarded the loyalists as a vital but disreputable rabble. So the Army’s Force Research Unit (FRU) enlisted a former soldier, Brian Nelson, to streamline the UDA’s killing machine. De Silva describes Nelson as ‘to all intents and purposes a direct state employee’ – a remarkable admission. MI5 used Nelson to orchestrate arms shipments to loyalists. The state, it seems, took control of re-tooling the paramilitaries.

All this is known. Indeed the killers of Pat Finucane are known. Investigative journalists, human rights advocates and loyalists themselves boasting about their executions have told us who did it. But what else lies hibernating in the state’s dungeons? De Silva’s insistence that ministers could not have known who was being targeted is bizarre. He appears to take at face value that ‘no records have been identified’ of ministers being briefed about intelligence being delivered to loyalists. We know about ‘no records have been identified….’ We know Doesn’t mean they aren’t there and can’t be found. Records that had not been identified have been found before.

However, he records a Security Policy Meeting on 26 September 1989 – before Finucane’s murder – that was attended by the Northern Ireland secretary and the heads of the security forces, and that was called precisely to discuss the traffic in information.

De Silva confirms that the heads of the security services, the Attorney General, Defence and Northern Ireland secretaries, and Downing Street, discussed the potential damage to public confidence in ‘our attachment to the rule of law’. And the Cabinet Secretary and the Prime Minister were told in 1991 that the potential charges against Nelson – the security services’ hidden hand steering the UDA –  were ‘as serious as they could be,’ indeed the FRU itself ‘might have to be disbanded’ if the public were told what it was getting up to.

We now need a public inquiry to discover who authorised the entire system, to ensure they face justice, and to know that Britain will not collude in such killings again.

The FRU itself, and its boss Gordon Kerr, have never been called to account, and Northern Ireland is the prototype for British so-called counter-insurgency in other wars against terror.

FRU was re-incarnated. It became the  Special Reconnaissance Regiment:

It was implicated in so-called counter-terrorism in London – notoriously the disastrous execution of the unarmed young Mexican worker, Jean Charles Menezes:

The SRC was fielded in Iraq: http://www.scotsman.com/news/international/british-tanks-in-smash-and-grab-raid-1-1096576

There, as if to vindicate the absence of both sense and sensibility in the Iraq war and occupation, the role of Britain’s undercover ops was to fill the ‘intelligence void.’

The SRC was to be found in the havoc of Libya, too.

And Gordon Kerr is still at large. Read this, published in

The Stevens and Cory reports confirmed security force collusion in the killing of Pat Finucane in the shape of Brian Nelson, Billy Stobie and Ken Barrett.

Nelson was recruited by the British army’s Force Research Unit (FRU) to infiltrate the UDA in the mid 1980s.

From his position as the UDA’s most senior intelligence officer he supplied his FRU handlers with continuous intelligence on the activities of the loyalist terror group.

However, rather than this intelligence helping to save lives, Nelson and his FRU handlers actively supplied the UDA with information which resulted in up to a dozen murders.

Judge Cory found ’’worrisome’’ evidence that Nelson’s handlers passed on intelligence to him, including the registration of a car used by Sinn Fein’s Alex Maskey.

Nelson would later plead guilty to conspiracy to murder the Sinn Fein councillor.

FRU documents uncovered by Stevens disclosed how on another occasion Nelson told a handler that he was having difficulties targeting a suspected republican.

The documents show that the FRU handler then carried out surveillance on the home of the would-be murder victim and supplied Nelson with photographs of the house so that he could produce a useful targeting package and thereby “impress” his UDA superiors.

While FRU handlers denied passing on intelligence a statement by Nelson to the Stevens team in 1993 revealed that one of his handlers had gone through his UDA intelligence files “weeding out” out of date material.

Nelson would later tell Stevens’ detectives that he had warned his FRU handlers up to eight weeks prior to the solicitor’s murder that he was to be targeted.

Through out Nelson’s role as a double agent Gordon Kerr was the officer commanding FRU in Northern Ireland.

Nelson later claimed in a prison journal that Kerr had driven a scout car to protect the agent as he moved intelligence documents for the UDA.

He further alleged that Kerr had suggested that the UDA should carry out a bomb attack on an oil refinery in Co Cork to put pressure on the Irish government at a time when it was resisting efforts to extradite republican suspects back to the north.

At Nelson’s trial in 1992 Kerr gave evidence in which he claimed that intelligence supplied by the agent had saved 214 lives, with only three fatalities.

However Kerr’s evidence was later called into question, with Cory concluding:

“Some might think that the testimony of the CO of FRU (Kerr) was, at the very least, misleading. In fact, on further scrutiny, it becomes even more questionable. During a chance meeting shortly after his testimony, (Kerr) told Chief Superintendent McFadden, of the Stevens Inquiry team, that he had made a “script” of his evidence and it was approved by others in authority.

“He later denied making such a comment. If he did make that comment one might wonder why a script was necessary and whether it indicates that something less than the truth was to be stated.”

After having visited Nelson in prison in 1992, Kerr wrote:

“We then talked a little about the Stevens interview technique and how he had been under the impression he was helping them to `clean up the UDA’ rather than talking himself into the dock.

“I summarised the position by gently reminding him that if he had obeyed the advice of his handler he would never have spoken to the Inquiry Team, would not have divulged his role, and would not have been prosecuted.”

When Nelson accused FRU of having placed him in an impossible position inside the UDA, Kerr concluded:

“It was not a very convincing excuse, but it indicated to me that he had really collapsed under the weight of his situation and once he started talking he could not stop. In fact he had been presented with a perfectly good cover story for the UDA i.e. he would tell his colleagues that he had destroyed the dump because he did not want it found by the Stevens Inquiry.”

Cory concluded that Kerr’s actions reflected a “pattern of conduct and an attitude consistent with acts of collusion taking place” and said that only a public inquiry could conclusively decide whether agents of the state were guilty of collusion in the murder of its citizens.

“In this case only a public inquiry will suffice. Without public scrutiny doubts based solely on myth and suspicion will linger long, fester and spread their malignant infection throughout the Northern Ireland community.”

What shall we make, then, of De Silva’s Finucane review? Its importance is not that he exonerates Whitehall, but that he hasopened up more truth-seeking opportunities for the Finucane family. David Cameron is misled if he believes that his admission and apology in the House of Commons in December 2012 will be the end of it.

(A shorter version of this appeared in the Guarian:

One thought on “WHEN IS COLLUSION CONSPIRACY?”