From my book: THE IRON LADIES
Virago 1987

Margaret Thatcher’s friends and enemies would say: she’s just like a man! She is the best man among them!

Uniquely in the public mind she belonged to one sex yet could be either. But she was not like a man; she was more than a man: a prime minister, a warrior and (allegedly) a housewife. Men are warriors and prime ministers but they are not housewives.

Part of women’s pleasure in Margaret Thatcher was everything to do with gender and her performance of power. But what did that say about femininity and its changing forms?

Thatcher was given the opportunity to engage with women’s political history, and she spurned it. For that would have involved acknowledging that first of all it was a struggle; a struggle to reach beyond the boundaries of domesticity to embrace power in the public sphere as well as responsibility in the private; and it would have posed the question: what was her own commitment to the political struggles of women in her own time?

All of that was impossible for Thatcher.

She insisted, ‘The battle for women’s rights has largely been won. The days when they were demanded and discussed in strident tones should be gone for ever. I hate those strident tones we hear from some Women’s Libbers.’

Margaret Thatcher invokes only the idea of the housewife, not the lived experience, she does not refer to her work, her isolation, her sacrifice, her other longings.

She made the domestic visible – but she made it the experience of women. But in making it visible she also rendered invisible the housewife also engaged in waged work and the contradictions experienced by the wageless housewife. 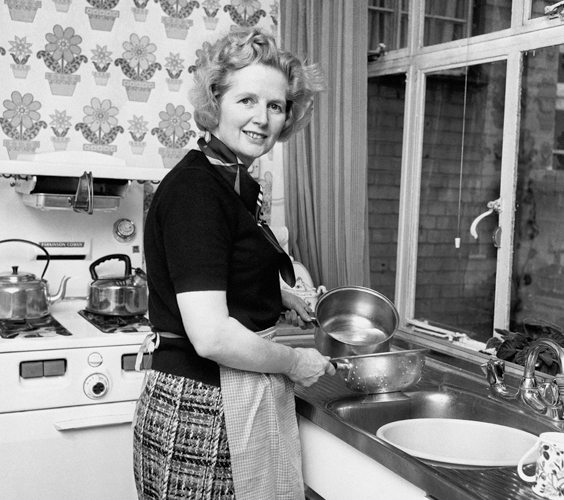 State support is reconstituted as an inducement to sloth. Women’s powerlessness is suppressed in her division of society into two classes – powerful state bureaucratic elites and the manipulated masses, including trade union ‘barons’ and ‘bully boys’.

‘We never went on demonstrations or on strike,’ she said.

Thatcher’s politics are patriarchal, but that doesn’t make her a man.

She puts femininity and power on display. It is not femininity, it is buccaneering masculinity that is evoked in her celebration of Victorian values, earlier prime ministers, merchant venturers, philanthropists… ‘This is a nation built on the success of the merchant venturers. Men who sailed into the unknown to carry our trade and bring back wealth to our people.’

Margaret Thatcher seeks something not given to women: valour.

She borrowed it – during the miners’ strike, the Falklands war, the resistance to détente…

‘I stand before you tonight in my evening gown, my face softly made up, my hair gently waved…the Iron Lady of the Western World! Me? A cold warrior? Well, yes…’

One of her advisers, Patrick Cosgrave, thought that some women who had been Labour voters might have been touched by the women’s Liberation Movement, and might be engaged by an emphasis on Thatcher’s sexual identity. But she ‘turned the scheme down flat’.

Many Conservative women felt disappointed that Thatcher did not empower women in the party. She was the triumph of an older tradition, albeit one that she herself transformed. She did not follow feminine archetypes in the Conservative Party, she preferred the prototypical patriarch: Churchill.

She was a model neither of traditional femininity nor feminism, but something else:

She offered feminine endorsement to patriarchal power and principles.