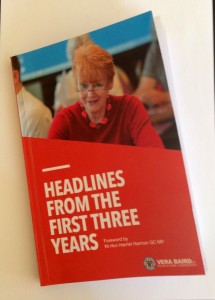 Vera Baird begins her rather remarkable book about her first term as Northumbria’s elected Police and Crime Commissioner with a story about rape.

That is unusual enough — policing sexual violence is rarely the priority in populist narratives about law and order.
But Baird is not the usual police commissioner.

The job was invented by the Conservatives to replace elected police authorities. Labour reluctantly participated in the 2010 election of Police and Crime Commissioners in 41 constabularies: six women were elected and 35 men, and Baird was one of them (on a slightly higher than the average low 15 per cent average turnout).

Whilst not necessarily a believer in the new system — it was a manoeuvre to further eviscerate local government — she is recognised as one of the most focused, novel and effective: an exemplar of how to be a Police Commissioner.

What she doesn’t deliver in this really useful little book is a gung ho account of crime figures going up, or down. What she does do, however, is place gendered violence at the centre of policing priorities for community law and order, peace and security.

Tyneside police were scalded by the public response to the fate of the young woman raped that night in 2013 in the midst of Newcastle’s fabled party culture.

Baird reports how a club doorman walked a very drunk teenager to a taxi after she’d been excluded from the club; she’d lost her pals, she was stranded, and she was so intoxicated that the doorman accepted the help of a man passing by.

He left her with this man without making sure that she was safe. She wasn’t. Some taxis refused to take her, the man raped her in a corner — noticed by other people out on the town that night — and then toured round the city passing her around other men until, writes Baird, ‘she finally “came to” in a car park with someone on top of her and fled to a club where a couple called the police.’

The girl’s fate and the response of the club door staff provoked outrage in the city. It changed things.

It was Newcastle’s good fortune to have vigorous feminist networks who launched a public protest and, unusually, two women heading up policing: Vera Baird and Chief Constable Sue Sim. Both understood not only the danger of sexual crime but its implications for crime and public safety generally.

Newcastle is a fabled party city; communities of razzlers and revellers are the new ‘flaneurs’ who hit the streets and lubricate the city centre’s flouring night time economy.

But that night in 2013, writes Baird, ‘the shocking persistence’ with which the men ‘had toted her around for hours appeared to forestall any victim-blaming against her and was so disturbing that it demanded a new approach to dealing with people when they are vulnerable through drink.’

Thus began a quiet revolution in community policing.
The problem began with door staff whose priority was ‘protecting a single set of premises from trouble, with no thought of what might befall the young woman once she had been removed.’

What did befall her was a night of multiple rapes. But door staff training included no reference to a duty of care to the public and ‘no training about predatory men.’
Two of perpetrators were arrested — they were identified on CCTV coverage.

However, the case pointed not only at rape culture and door staff indifference, but to the police: people had complained to officers patrolling the city that night about what was happening in that corner: sex with a helpless woman who could hardly stand or speak — and therefore could not consent to anything.

This was brushed aside after the man persuaded the police that they were a couple.
So, everything was wrong.

Baird describes how she pulled together the police, club managers, community safety staff, women’s networks and businesses to work with Tyneside Rape Crisis Centre on a safety strategy for the city.

That’s what makes her book, ‘Headlines from the First Three Years’ so salient: it is not only an account of a strategic attack on men’s violence against women, but a ‘how to’ guide to making the night time economy safer and making institutions take more responsibility.

Baird re-visits research on the lamentable response of police generally – with some honourable exceptions – to the reform of Britain’s laws on sexual assault and violence against women.

Baird, of course, drove the reform of the sexual offences legislation when she was Solicitor General in the last Labour government.

One of its most significant changes was the requirement that men secure consent for sex and that women have to be capable of giving it.

Her Majesty’s Inspectorate of Constabulary has published several reports showing that police culture has shown itself resistant to the reform of gendered crime — and that’s what makes this book so pertinent.

It is not only strong on gender – which you would expect from a feminist Police Commissioner — but on how and why gender is important to understanding perpetrators, victims — including all victims of violence — more generally, and why that enhances the administration of justice generally.