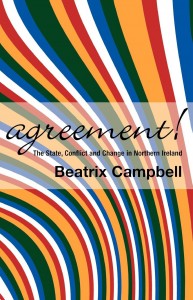 Agreement! The State, Conflict and Change in Northern Ireland, was published in May 2008, with launches in London, Belfast and Dublin.

“The spinners of history are rarely the makers of history. The real story of Ireland’s journey to pace and justice is murkier, more treacherous and often more inspirational than our political masters would have us believe. Bea Campbell is a great chronicler of our times: humans and politically astute, with a keen understanding of the double dealing, interplay and courage that underpinned the long peace process, which was really won by ordinary men and unsung women in Northern Ireland.” — Helena Kennedy

“Outstanding, an impressive and insightful book. The story of international diplomacy and political deals has been told elsewhere, but this details another story, about the contribution of civil society, the women’s movement and a coalition of those committed to a unique constitutional moment, and to the means by which the state might reinterpret itself and be changed.” — Professor John Morison